As part of our work to commemorate the centenary of the First World War, our volunteers have been working to produce indexes to several series of records from this period. The aim is to improve their accessibility to, and to make them easily searchable by members of the public who are seeking to commemorate the war themselves, or are looking for information on the impact of the war upon their family, town or locality.

The resources produced by our volunteers are available to download from this page.

To commemorate the centenary of the Battle of Mametz Wood, Rosemary Nicholson researched the men whose names are recorded as having served at Mametz within the Cardiff City Corporation Roll of Honour held at Glamorgan Archives.

The roll of honour records the name, address, age, rank and regiment of these soldiers, providing a starting point for the research which appears in her booklet. Some of the names have revealed an interesting hidden history of information, whereas other names did not reveal very much at all.

This is the first of two documents researching Mametz Wood produced by Rosemary.

This is the second of two documents researching Mametz Wood produced by Rosemary Nicholson.

This document commemorates members of the 16th (Cardiff City) Battalion, Welsh Regiment who also met their end at Mametz Wood.

These research papers on the Cardiff City Corporation Roll of Honour were presented to Glamorgan Archives by the author, Rosemary Nicholson, and appear on our website with her kind permission.

The research is arranged according to the department of the Corporation in which the individual employee worked at the time of joining up.

To commemorate the anniversary of the First World War, Rosemary Nicholson researched the men whose names appear on the Aberdare Cottage Homes Memorial Roll held at Glamorgan Archives. There are a total of 83 names on the roll, some with more information than others, and it seems they all attended the Industrial School at Trecynon, Aberdare.

The full text of the roll of honour research is accessible here. Although Rosemary has found as much information as was possible at the time, the research is far from complete. If anyone recognises a possible ancestor amongst the names on the roll of honour and is able to fill in any missing details, please contact Glamorgan Archives as we would love to hear from you.

The research paper on the Aberdare Cottage Homes Roll of Honour was presented to Glamorgan Archives by the author, Rosemary Nicholson, and appears on our website with her kind permission. 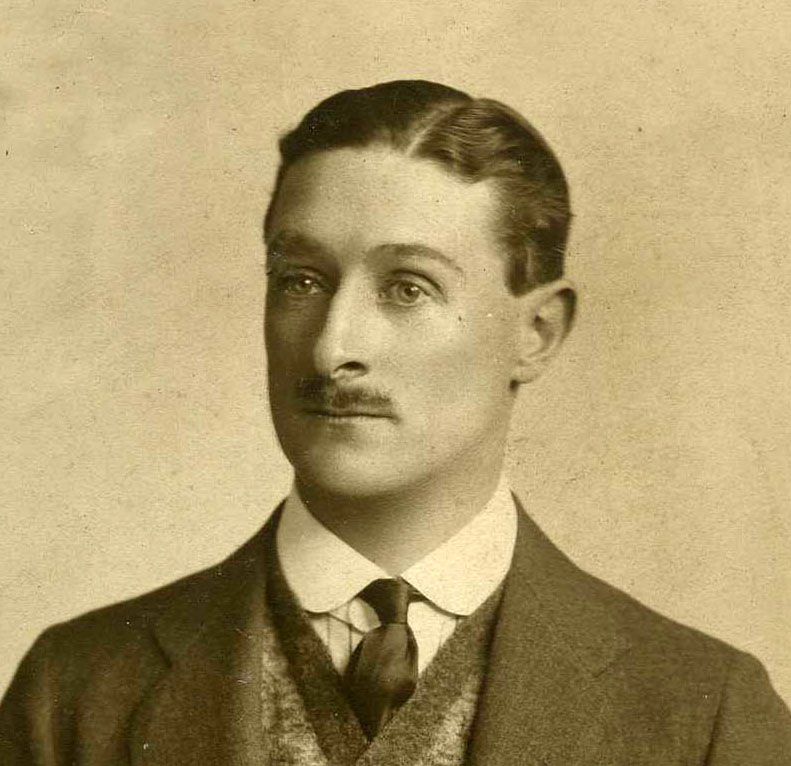 The War Diary of Mervyn Crawshay

Mervyn Crawshay was born on 5th May 1881 in Dimlands, Llantwit Major, the son of Tudor Crawshay, High Sheriff of Glamorgan, and grandson of iron master William Crawshay of Merthyr Tydfil. Mervyn choose to follow a career in the army and joined the Worcester Regiment in 1902, serving for two years in the South Africa war, and transferring in 1908 to the 5th Dragoon Guards (Princess Charlotte of Wales). He was promoted to captain in April 1911. Crawshay was a noted fine horseman and represented England in military tournaments held in America in 1913, winning the Gold Cup in the competition open to the world.

Mervyn Crawshay was a member of the comparatively small British Expeditionary Force dispatched to assist the French in defending Belgium in the face of a German invasion. The opening entries of his diary, from the 15th and 16th August 1914, describe leaving Southampton and arriving in Le Havre. The diary ends abruptly, mid-sentence on 29 October 1914. The full text of the entries can be read here.

Old Boys who served in the First World War

On the outbreak of the First World War, the Headteacher of Cardiff Municipal Secondary School, William Dyche, contacted his former pupils asking them to keep in touch so that he could collate details of their contribution to the war effort. Several old boys did just that, and continued to correspond with William Dyche throughout the war. William Dyche kept these letters, which now form part of the School’s records held at Glamorgan Archives. They provide a first-hand account of the war time experiences of young men from Cardiff.

Volunteer Rosemary Nicholson has undertaken research on the Old Boys who wrote to William Dyche, tracing their military service and, for those who survived, their lives after the war.  Rosemary has kindly gifted a copy of her research to the Archives, and has given us permission to share it on our website.

The second document traces the commissioned old boys included in the Provisional List of Masters and Old Boys serving with HM Forces in the Great War, 1916 (ref. EHGSEC/11/8).

And the third traces the non-commissioned old boys featured in the same document.

Back to Indexes and Transcriptions